Zandra Rhodes: shoes unlike anything else
A notorious English designer, Zandra Rhodes has been a part of fashion since 1960, when she opened her first boutique. Her shoes stood out: lively colours, high heels, tons of detail: they perfectly embody British extravagance. Her original and visual designs have been worn by some of the world's most famous women: from Jackie Kennedy and Princess Diana as well as Kylie Minogue, stylish trendsetters can't get enough of the original world of Zandra Rhodes. 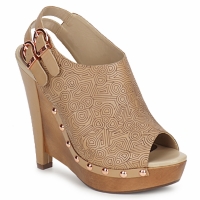